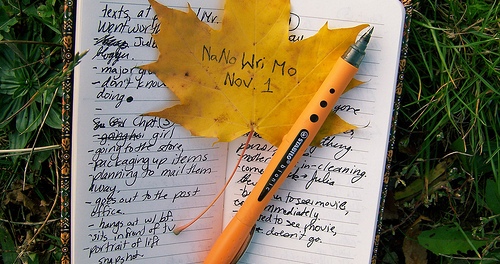 National Novel Writing Month is just around the corner, and I can hear the Mr. Coffees warming up already. While friends are pulling out their turtlenecks and planning which version of Green Bean Casserole to serve at Turkey Day, I’m power-washing my keyboard.

And I’m willing to bet you’re just like me. You’re a writer, and NaNoWriMo is your National Holiday.

So N-Day is nigh, you’ve said your goodbyes and sealed your writing bunker. The coffee is brewed, the Skittle bowl topped off, and you’re ready to get to bitness!

Never fear, word junkie! You have a plan. And that plan starts with Outlining.

Don’t sneer. Outlining  is good. I know we like to roll up our sleeves and dive in ass first, but there’s a reason we look before we leap. Sometimes that story is filled with sharks.

Outlining Will Help you Finish Your Story.

Spend enough time around writers, either online or *gasp* in person (don’t forget the Purell) and you’ll start to hear the same things:

“Finish what you start.”

The last one’s the important bit (though I’ll understand if you want to focus on number two instead). Writing “The End” is incredibly powerful. Not only will you feel like a badass, but you’ll learn a ton in the process.

Which is really a fancy way to say, know where your story should end before you start. Really. Seriously. If nothing else, write an outline that looks like this:

Sure, there are a few things missing, but at least you’ll know where you’re going. How you get there is another thing…

Outlining Will Help you Plot Your Story.

Someone far smarter than me once said plot is the interaction of character with setting. Plot drives your story, it’s the map leading readers through your prose wasteland. It also sounds like “plop,” which makes me giggle.

So, maybe you don’t know what leads Fred to create his zombie-giraffe sanctuary, but you do know that zombie novels need action, because Walking Dead, cash money, Zombies-Are-The-New-Twilight, ka-ching…you get the idea.

That’s outlining gold right there. Of course, how they get out of the zoo and avoid that ape-poop is up in the air. Plus, “adventures?” What does that mean? Who cares, you’ll figure that out while you write, because…

Outlining Will Change with your Story.

I hear this beauty all the time: “Well, I made an outline, but I threw it away because my story changed while I wrote it.”

Dude! Put down the lighter and step away from the outline.

It’s alright if your story looks different from your outline. Hell, it’s supposed to look different. We don’t write in a vacuum, and we’re all “pantsers” at heart—our story warps as we write it. No need to toss the outline, just update it to match your story.

They didn’t escape the zoo? Chimpanzee shit was the cure all along? Friend, your outline isn’t made from adamantium. Hit the delete button and make it current with your story.

We don’t burn the map every time we get lost. We find our location, chart a new course and get back on the road. The destination may change, but it’s still nice to have a guide.

Nic Widhalm is a writer based out of Colorado, and specializes in stories of change, juxtaposition, and things that go bump in the night. You can visit him at nicwidhalm.com

5 Comments on Prepping Your First Draft, or What the Hell Have I Started?

Copyright © 2023 Create a free website or blog at WordPress.com.